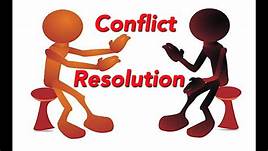 WHY DO PEOPLE HAVE CONFLICTS?

A conflict is simply a clash of interests between two or more parties. Conflicts are not totally wrong in themselves; they are part of any healthy relationship. One could ask, why would friction or conflict occur if we really like ourselves? Everyone is unique and thus has different opinions, perceptions, values, and desires; this variance would most times lead to a conflict. There are a million and one reasons why people have conflicts, but it’s important to note that in order for conflict to arise between two or more people, there must first be some type of existing relationship. This does not dispute the fact that strangers on their first meeting can have conflicts but this kind of conflict is usually short-lived and does not involve strong emotional investments.The kind of conflicts in discourse is the kind of conflicts that occur between friends and love ones. Conflicts in the community are universal, this implies that where there are no conflicts there are no relationships and there is no life. However, conflicts can be managed well and maximized but before attempting to resolve conflicts it’s important to determine or spot the triggers.

Here are major reasons why people have conflicts in the community:

No two people are the same, nature and nature, attitudes, desires, and interests – all these form the background for individual differences and uniqueness. This is a major reason why people have conflicts.

Culture is simply the way people live their lives and because of environmental uniqueness, there are different groups with diverse cultural values which ultimately may cause conflicts. This also involves religious differences which over time have led to wars and persecutions.

Social change can also lead to conflict; this happens when there is a social lag in a particular social class. When a social class does not change along with trends and civilization it may lead to a conflict, therefore this conflict is motivated by a social disequilibrium.

Due to individual differences and other differences, different people and groups may occasionally clash due to their unique desire and interest.

This is basically accommodating the other party; this kind of style requires a lot of patience and courage forsakes your own needs or desires to put the concerns of others before your own. You either simply gives in or are persuaded to give in. The bible says “It is to one’s honor to avoid strife, but every fool is quick to quarrel” (Prov. 20:3). This style can lead to making peace and moving forward, it also teaches the second party subconsciously by example to be more considerate.

This style is similar to giving way but unlike it, this style simply means you withdraw totally before a situation leads to an outright conflict. This style also requires courage as it implies forgiving or letting go even before the other party recognizes they needed your kindness just as Christ.  Ephesians 4:32, be kind and compassionate to one another, forgiving each other, just as in Christ God forgave you. Even so, avoiding conflicts should not be a substitution for proper resolution because neglecting conflict when this should be dialogued and sorted out is like putting fire in a room and locking the door, it would lead to larger conflicts.

This also demands a different kind of courage where you simply have to enforce your will and desire by insisting. Here it is more inconsiderate but you insist and do everything within your means to win the argument. This approach can yield short time results but imagine the other party having the same approach to the situation. While it might seem somewhat harsh it can be the absolute best choice to resolve conflicts, especially small ones. This style rejects other styles except competing, it can prevent resolution except one party decides to compromise.

This is one of the best styles where both parties decide to look through the lenses of each other and then finding common ground by being considerate.  Both parties negotiate on larger points and let go of smaller points. Compromising also means that each party puts the needs of the other before their own, it can set the stage for collaborating later but can also lead to resentment especially when it is one-sided.

This style implies that both parties come together to agree. Collaborating as a strategy means both parties listen to each then work together, therefore, resolving their conflicts. With this style, the goal is to find a solution that will benefit all the parties involved.

However, to improve your ability to resolve conflicts, you must develop your conflict resolution skills by listening carefully to the other party, not with the intention to reply but to understand adequately. Another is to beyond listening to being able to spot the exact reason for disagreement, also learn to communicate your own views and need. Focus on resolving the problem by not seeing the opposite party as an outright antagonist but rather as someone or people fighting for their interest, never see conflicts as problems, see them as opportunities to grow.

Just as there are five love languages a popular theory by a duo that helps people understand how to express love to those around them, there are five apology languages still by the same writers, Chapman and Thomas; the purpose of this is to educate people on how to apologize using different strategies. You may have one preferred language but can also adopt more depending on the situation on the ground. The five apology languages are:

This is simply acknowledging you are wrong, not letting pride and arrogance get into the way by saying “I’m sorry”. Most times it advised you to go beyond saying it to listing out what you are sorry for and the effects of your actions. Saying “I’m sorry” comes easier to some than others.

Accepting responsibility is very important, the apologizer must take up this position for restitution. This has a direct impact on the other party so similar to the other, you are accepting you are wrong than finding good reasons, explanations, or excuses for misbehaving.

Sometimes expressing regrets and taking responsibility for our actions are not good enough. For instance, why just say you are sorry when you can take a step further by undoing what was done such as returning a stolen item, or taking back unkind words, or reassuring the other person of your commitment and love when you go wrong.

To genuinely repent is to turn around from what it is you are doing that is wrong.  So as established before, sometimes depending on the severity of the offense multiple apology strategies are employed. Genuinely repenting is verbally declaring your desire never to hurt the other person again, telling them you want to change, and daily making visible plans and actions towards the success of this goal.

This is a total surrendering of the fate of the relationship to the other party, admitting failure, and accepting the possibility of rejection. Requesting forgiveness is an apology that is accompanied by restitution and repentance as well as plans for the future.

Conflicts however are totally inevitable but understanding apology languages can foster healthy and stronger relationships where we move beyond our differences, compromising on our selfish desires to accommodate others while taking responsibility for our wrongdoings.

We hope that you enjoyed this article and that you can apply everything that you learned from here today.

Join our program now to continue to get information to make better life decisions @  https://www.thefourthmanfoundation.org/celebrate-program-for-young-adults/

If you personally are benefiting from all of our resources on here, feel free to share with a friend, a co-worker, or a family member.

It is very important to understand that the topics covered in all our modules should be applied in the context of relationships, eternal perspectives, spiritual disciplines, financial freedom, and mental health.

Finally, we want to leave you with these five important questions that will change your life.

We hope that you have an awesome day. See you next time.

HANDLING ADVERSITY So What are adversities? Does everyone really face adversity? One thing we know…

WHAT ARE BOUNDARIES? “Do unto others as you would have them do unto you” (Matt…